Fiddler on the Roof

“From the rousing opening number […] to the sad and quiet ending […] this production of ‘Fiddler’ is solid, entertaining, fun and emotional.”

Fiddler on the Roof — Ephrata Performing Arts Center’s 2013 holiday production—is exotically set in a small Jewish village in Tsarist Russian in 1905, but the Tony Award-winning musical is beloved around the world for its universal appeal.

The economic struggle of Tevye, simple milkman, to provide for his wife and five daughters and to cope with his eldest daughters’ choices of suitors he finds unsuitable strike a common chord among parents everywhere.

The intolerance suffered by Tevye, his family, friends, and even some Russians, also resonates strongly today among all minorities.

But, most of all, Fiddler on the Roof excels as an uplifting paean to the family ties and “Tradition” that bind and sustain us all through the most difficult times.

That is what makes Fiddler such an ideal holiday offering.

“EPAC’s ‘Fiddler on the Roof’ is charismatic and thrilling. It is a show for everyone – its insights, conflicts and story about family are a familiar tale that everyone can relate to. This is a production where everything is done impeccably well.” 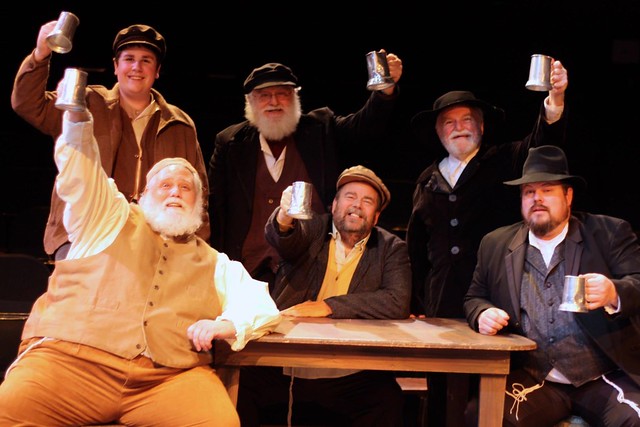 “EPAC production of ‘Fiddler on the Roof’ is lovingly crafted”

Behind the Lines: EPAC & Dutch Apple

Director Pat Kautter and EPAC’s Creative Director and Fiddler star Edward Fernandez (Tevye) can be seen on Blue Ridge Cable 11 talking about the upcoming production of
Fiddler and the entire 2014 season. Titled Behind The Lines
you can see the interview the week of December 8th.