Three young men seek to make a mark for themselves amid the difficulties of a post-9/11 world.

American Idiot opened in 2009 at the Berkeley Repertory Theatre and in 2010 moved to Broadway, where it went on to win two Tony awards and a Grammy during its 122-show run. Adapted from a concept album by successful recording artists Green Day, American Idiot follows the lives of three young men searching for meaning in their lives as they keep running into troubles at every turn.

Written by Green Day vocalist Billie Jo Armstrong, who performed in portions of the show’s original run, and Spring Awakening director Michael Mayer, the American Idiot score includes all songs from Green Day’s 2004 Grammy-winning album of the same name, which explored the harsh realities of a post-9/11 American existence. 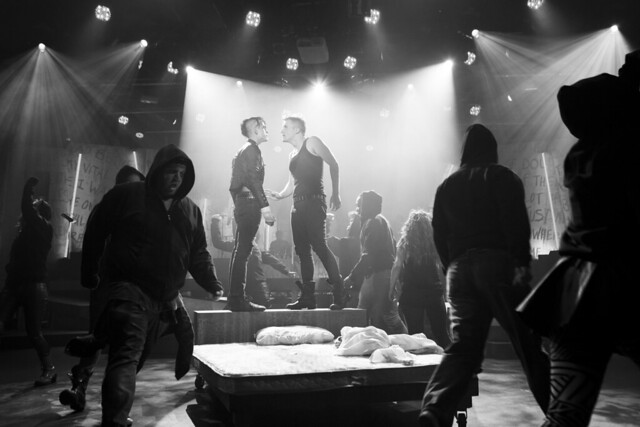 The show is directed by Richard Repkoe, who will bring young Johnny, Will, and Tunny to life in this moving production called “gorgeously wrought” by The New York Times. American Idiot takes a definitive look at post-9/11 America that mirrors The Beatles’ Abbey Road and brings to life a timeless message of the effects of war on the youth of our country. “American Idiot is the seminal rock opera of our time,” says Repkoe. “It’s commentary resonates with many generations as it outlines the changes from a pre to a post 9/11 America. The dreams, frustrations and passions that many feel, no matter what age, are thrust upon the stage with never ending energy and a message that we are all sharing these hopes and desires while mourning the loss of the American dream.”

At the ‘American Idiot’ Black Carpet Premiere in Ephrata, they wore their punk finest

Watch EPAC go on the road with American Idiot and LancasterOnline.

EPAC’s Show Sponsors are Fine
Living Lancaster and
The 1.21